“I just had an idea, and wanted to share it with you.”  Unfortunately, in church circles, this is often how someone levels a criticism at you.  I braced myself.  But I trusted this person on the phone, so I listened.  He went on to suggest that I begin writing–perhaps just a brief synopsis of what I had spoken on the previous Sunday.  He admitted often forgetting what I had said just days before, as the demands of work, family, and the overall busyness of life drowned out a few moments of clarity on Sunday.  I breathed easier.  I took it as a compliment of sorts.  That he wanted to be reminded of the things I was saying during his week.  He mentioned often having to travel, and how others as well might be missing what is said in a given week.  That this brief synopsis might be able to continue the conversations we’re having as a community.  I agreed.

I went on to confess to him that I had once started a blog.  (As of this writing, it has been almost 18 months since I last wrote).  But I had gotten lazy with it, wondered if anyone was reading, and just needed to be disciplined again with it.  I told him that his phone call might just be what I needed to start it up again.  (Thank you!  You know who you are…)

So here we are.

To begin, ask yourself this question:  How tired are you of waiting on God?

This past week, I talked about a story found in the gospel of John.  The resurrected Jesus appearing on the shore, his disciples fishing all night, catching nothing.  He tells them to put their net on the other side of the boat, and voila, net full of fish.  At this point, one of the disciples knows this is Jesus (they don’t recognize him from being 100 yards off shore).  Peter jumps out of the boat, rushes to the shore.  The rest of the disciples bring in the boat and net full of fish.  They find Jesus has already cooked them a breakfast of bread and fish over a charcoal fire.  “Come and have breakfast,” Jesus says.

I spoke about three of the sentences found in this story.  One spoken by Peter, one spoken by John, and one by Jesus.

Peter says this.  We don’t know why, though commentators love to speculate about what was going on in his head.  He had given up fishing for a living, followed this rabbi/teacher Jesus of Nazareth around for 3-plus years, saw him do amazing things, say powerful and provocative things.  He saw this man he called Lord arrested, flogged, and heard* he was crucified–a horrible, shameful death for a criminal. He then is there when Jesus appears to a locked roomful of disciples.  What do you do with that?

“I’m going fishing” represents all the times in our lives that we return to the thing we knew how to do when we don’t know what else to do.  When we grieve the loss of something or someone, we at some point have to return to the “normal” things of life.  We may seek out the thing that brings us comfort because we know how to do it, maybe without thinking.  None of us really know how to grieve.  We go “fishing.”

John says this.  He says it when Jesus tells them to cast the net on the other side.  The disciples do this, and the net is full of fish after a night full of no fish.

John recognizes that only Jesus does this kind of thing.

“It is the Lord” represents those times in our lives when we see God show up in the only way that God does.  It is so unique to our situation that we know it is Him.  He does something that reminds of a previous event or chapter in our lives.  And it is nothing short of a miracle.  It is an abundance out of nothing.  One moment–nothing.  The next–abundance.  It is the Lord doing that. 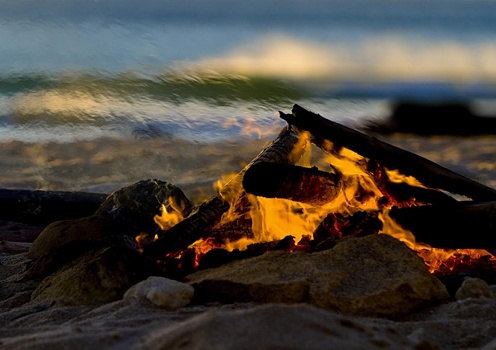 “Come and have breakfast.”

Jesus says this.  It’s a marvelous picture, really.   The God of heaven and earth in the flesh, the One who made all things, the One who suffered death and was now alive, cooking breakfast for some Galilean fishermen.  The Bible doesn’t say where Jesus got the bread or the fish.  Yes, I know he could have just spoke it all into existence. “Let there be bread and fish,” and poof! Fresh baked bread and fish.  But there is this detail of the charcoal fire in the story, and for me, that throws out that idea “Jesus makes a magic meal.”  Can you picture Jesus walking the streets early that morning?  Buying bread from someone that He knew baked it just right?  How about Him walking down to the shore?  Can you picture Jesus gathering sticks, starting the fire (how did they do that back then?), slowly stoking the fire just right to cook the fish perfectly?  Warming the bread on stones next to the fire? I can see it.

“Come and have breakfast” represents those times in our lives when God is simply inviting us to sit down, let Him provide for our daily bread.  After all, didn’t Jesus teach us to pray that?  The picture is deeper.  God inviting us to have a conversation with Him.  An unhurried conversation over a simple meal.  And those opportunities are there for us every day.  In the mundane moments of our lives.

It’s a beautiful story.  A miraculous catch of fish.  And a mundane meal.

God shows up in the both the miraculous, and the mundane.  May we have eyes to see both.

* The gospels do not record Peter as being at the cross, though some speculate he looked on from a distance based on Luke 23:49:  “But all those who knew him . . . stood at a distance, watching these things”